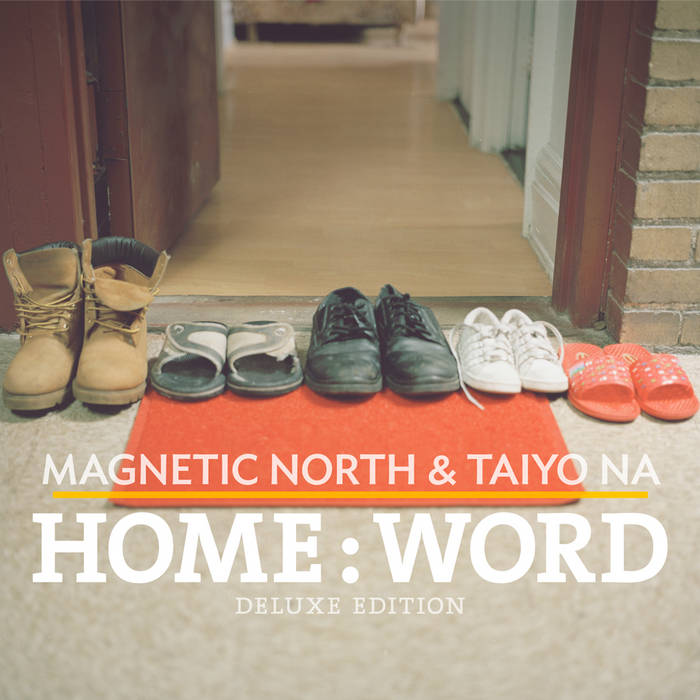 buttlessdragon this album is amazing...I kinda miss the old album though, i just recently moved forward with my life, i was in my teens first hearing about Magnetic North first...you guys came so far. im glad i looked back and searched for you guys. <3

Home:Word [Deluxe Edition] is a rerelease of Magnetic North & Taiyo Na's 2010 US album Home:Word. Remastered, resequenced, repackaged with an exclusive lyric booklet and 6 new, additional tracks, the album was inspired by their recent single and album deal with Japanese hip-hop label Goon Trax (Media Factory). The title song "Home:Word" was featured on one of Goon Trax's popular compilation albums In Ya Mellow Tone 6, released March 2011. Within a week the song shot up to #2 on Japan's iTunes Hip-Hop charts and became a song of solace for many who were afflicted by the ongoing Earthquake, Tsunami and Nuclear crisis. Further moved by this course of events, one of their new songs on Home:Word [Deluxe Edition] is "Fukushima." Released as a music video on September 11, 2011, "Fukushima" is a song dedicated to the victims of the tragedy in Japan as well as others.

Home:Word [Deluxe Edition] is a culmination of 3 years of creative partnership between artists Magnetic North and Taiyo Na. Without devaluing the concert tours, music videos or newfound international success, Magnetic North & Taiyo are proudest of their Holla Benefit Concert Series (2009's Home for the Holla'Days, 2010's Home for the Holla'Days II and 2011's Holla For Japan) which have collectively raised over $30,000 in charity. Collaborating with other like-minded musicians to put on concerts to aid urgent causes have brought their passions for music and social responsibility together in the most fulfilling of ways.

The new songs on Home:Word [Deluxe Edition] feature many of the other artists who have shared the stage with Magnetic North & Taiyo Na at their Holla Benefit Concerts such as singer/songwriters Sam Kang, Cynthia Lin, Scooter Oyama and Ruth Cho, producers Jaron Lum and Chucky Kim and saxophonist Jonathan Lee.

Additional updates and information can be found at www.magnetichiphop.com

ART DIRECTION AND DESIGN BY THE THREE-HALF COLLECTIVE